Struggling Grandpa Returns $43K He Found In Used Couch, Days Later He Gets A Call 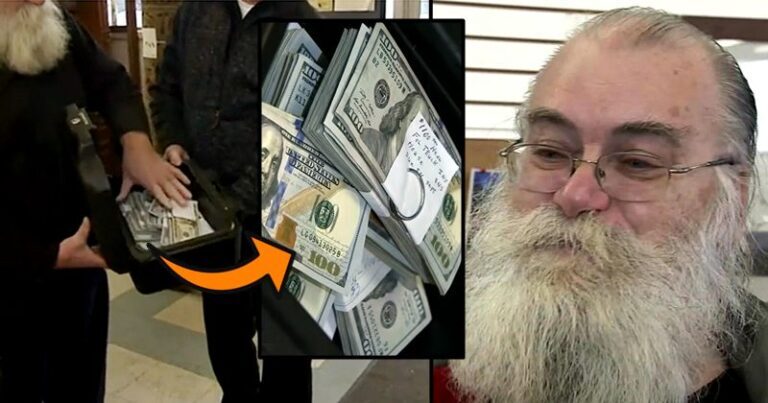 When a struggling grandfather discovered $43,000 in a second-hand couch he bought, he refused to keep the money for himself even though he desperately needed it. After returning the cash, he received a phone call he never expected.When Michigander Howard Kirby wanted a couch for his man cave, he headed to the Habitat for Humanity Restore in Owosso.

He shelled out $70 for an old rustic couch and matching ottoman set that still had some life left in it. Little did he know, something extra was included with the antique furniture.After complaining that the ottoman was oddly shaped and uncomfortable, Kirby’s daughter unzipped the cushion.

From inside the padding, the woman pulled out banded stacks of $100 bills one after the other. When the pair added up the stacks, they counted a total of $43,170, Fox News reports.

“That’s when she started pulling out this,” Kirby told the station, holding up a fistful of cash. “I still have to pinch myself to make sure I’m not dreaming or something.”

Kirby had been through a lot. Within a year, he had gone through a devastating divorce, lost a close cousin to cancer, and survived losing a kidney after doctors discovered a tumor. He even allowed his son to move in with him after he lost his job. He counted all the ways he could use the money, including a new roof for his meager home or paying off his medical expenses, MLive reports. Then, he felt convicted.

“The Holy Spirit just came over me and said, ‘No, that’s really not yours,’” he said.

Although a lawyer assured him that he could legally keep the cash, Kirby knew it wouldn’t be right. Instead, he called up the thrift store and asked them to track down the person who donated the couch.

The store traced the furniture to Kim Fauth-Newberry, who had donated the couch belonging to her late grandfather. The woman was shocked, having no idea the money was in the ottoman. Kirby met up with the family and handed every penny over to the rightful owners.

“Being a born-again Christian, Christ in me is the one that actually gave the money back,” Kirby said. “Remember the bracelets, WWJD? Well, that’s what Jesus would do.”

While Kirby was content in knowing he had done the right thing, he still had to face his own financial struggles. Incredibly, just days after returning the money, he received a phone call. It was John Conversa with Eikenhout Building Supplies, telling Kirby the company was going to donate materials and hire a contractor to repair his roof.

Additionally, a good Samaritan started a Go Fund Me to help Kirby with his financial burdens and raised $16,000 for the struggling grandfather. Regardless of the support, Kirby says he would do it all over again in a heartbeat.

“I have had so much peace, so much joy because I did do it, that $43,000 never could buy that much joy or peace or happiness,” Kirby said.

As for the support and donations he received, Kirby says he is “blessed beyond words” and never expected such a big response.
“There is so much thankfulness, it boggles my mind sometimes what is happening for me,” Kirby said. “I’m just amazed by it.”

Thanks to caring donors, Howard Kirby is getting back on his feet again. He no longer has to worry about his roof and he is continuing to make repairs to his house as well as helping his own family get by.

Kirby is living proof that there are still people out there who care about others more than their own needs. Not only did he do the right thing by returning the money, but he serves as an example of love and kindness to others.