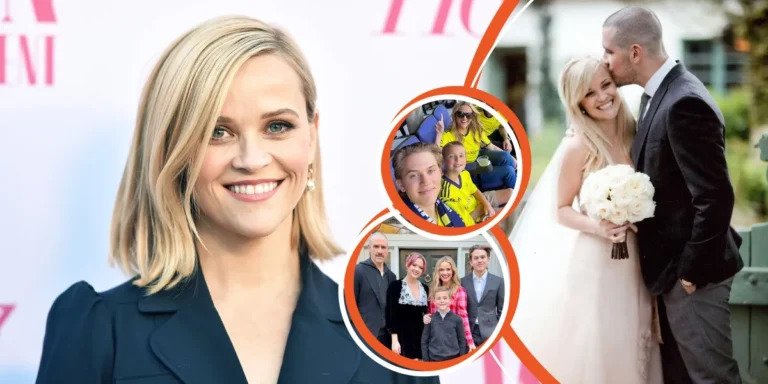 Reese Witherspoon went through a rough patch after her first marriage of seven years ended. Years after her marriage ended, she found love again in the arms of Jim Toth, the man who would be her second husband.Witherspoon never imagined she would get married again, but Toth changed her mind, and they have been happily married for 11 years and share one son.

American Actress and Producer Reese Witherspoon has had a rewarding time in Hollywood. A recipient of multiple awards, the icon has proven to be one of the most prolific stars in entertainment. However, away from the camera, Witherspoon’s life is far from perfect.The actress has had her fair share of challenges, including a failed marriage — she was married to American Actor Ryan Phillippe.

The pair tied the knot in 1999 when Witherspoon was only 23 years old.

The movie stars welcomed their first child and daughter, Ava Phillippe, that same year. Then, on October 23, 2003, Ryan and Witherspoon, who was 27 at the time, celebrated the arrival of their second child and son, Deacon Phillippe.

Everything seemed to be going well for the actress and her husband, but it was only a matter of time before their union collapsed. In 2006, after seven years of marriage, the duo parted ways.

A few years after the divorce, Ryan opened up about his marriage to his ex-wife and why it ended. During a 2015 interview with Larry King, the “I Know What You Did Last Summer” star made it known that age played a role in the collapse of his marriage.

According to Ryan, they were very young when he and Witherspoon became romantically involved. The actor believed that being so young and in the movie industry simultaneously could cause problems between two people.

Similarly, Witherspoon shared her former husband’s sentiments. Two years after Ryan’s chat with Larry King, the actress insinuated that her age might have contributed to the failure of her first union. In Whitherspoon’s words (via The List):

Although Witherspoon and Ryan had almost identical thoughts about the reason for their divorce, there were rumors that the latter’s infidelity might have caused their marriage to end.

According to the rumors, Ryan cheated on his wife with Actress Abbie Cornish while filming “Stop-Loss.” However, to date, the rumors are yet to be proven true.

Witherspoon’s Divorce Challenges
The year following Witherspoon’s divorce was the worst year of her life. During an interview, the Golden Globe award winner described herself as a “raw, fragile little nerve.”

According to the actress, the divorce left her feeling humiliated and isolated. Witherspoon admitted that it was a painful process and kept thinking that marrying Ryan was not the right decision.

By December 2010, Toth and Witherspoon were already engaged. The latter admitted that getting married again was not on her mind even when she met her man, but he changed her mind.
Witherspoon was hit so badly that she thought the people who told her the pain would pass were deluded. She was sure she could never feel better, and nothing could make sense.

Unfortunately, the actress’s career also suffered from mental and emotional stress. Witherspoon later confessed that she could not be productive, as her brain was like “scrambled eggs.” Ultimately, it was a bad time for the actress.

But eventually, she knew remaining that way for long would do her no good. So, to heal, Witherspoon stopped the blame game. She determined what part of the problem was her fault and took responsibility for it.

While it was painful, the starlet knew it was the only way to get real-life knowledge out of everything. In the end, Witherspoon admitted that the entire experience was a “great redirection.” She learned she was not controlling everything, and that revelation changed her life.

Witherspoon Finds Love Again
Following her failed marriage, Witherspoon finally found peace and love in the arms of her second husband, Jim Toth. The pair first crossed paths in 2010 at a friend’s house.

Recalling their first encounter, Witherspoon noted that a drunk guest had attempted to hit on her. She added that the man, who was “slurring and scowling,” would not leave her alone. Luckily, Toth, a Hollywood talent agent, came to the rescue.

He apologized on his drunk friend’s behalf, noting that the latter had just broken up with someone. Witherspoon accepted the apology, and shortly after their first meeting, they started dating.

The actress seemed to be at peace, especially as her talent manager boyfriend was not a celebrity. There was no pressure, and the duo got to know each other more privately.

By December 2010, Toth and Witherspoon were already engaged. The latter admitted that getting married again was not on her mind even when she met her man, but he changed her mind.

According to the movie star, Toth promised to show her what a good partner and person he was. He vowed to take care of her to the point where she would get used to it.

So, Witherspoon believed Toth and decided he was the one for her. In March 2011, the lovebirds exchanged wedding vows at the actress’s ranch in Ojai, California.

For the occasion, Ava was the maid of honor while Deacon was the ring bearer. Overall, it was a special day for the couple, their family, and their friends.

Witherspoon’s Life after Her Marriage
On September 27, 2012, over a year after the couple tied the knot, Witherspoon and her husband welcomed their son, Tennessee, making the former a mom of three. Over a decade later, the award-winning actress is still a loving mother to her youngest son and two older children.

She talks about them during interviews and opens up about the bond they share. During a 2019 chat, Witherspoon spoke about how she felt when Ava went to college in the fall of 2018. In her words (via People):

“It’s weird when your children go away to college. It’s hard. And I never imagined how it felt for my mom. I might’ve gone into her empty room, laid on her bed, and cried when she went to college.”

But thankfully, Witherspoon was not all alone as she still had Deacon with her. The young adult clocked 19 on October 23, 2022, and the proud mom celebrated her son with an Instagram post. She shared a picture of the handsome son sporting a bright smile.

In the caption, Witherspoon described Deacon as the guy with the most joyful energy, endless drive, ambition, and talent. She also noted that she loved and was proud of him.